Many of our customers ask us what the ‘Team-based Permissions’ option in the Sugar Admin panel is and how it works. In this blog post, we will explain to you how team-based permissions are used (Click on the below images to enlarge).

User ‘Will Westin’ has access to Teams ‘National’ and ‘International’. With these Team permissions, Will can see all records that sit in one or both of these Teams.

Will’s manager wants Will to be able to see National and International records, which is covered in the above Team settings. So far so good! However, Will should only be able to edit the National Account records.

In the Role settings that have been applied to Will’s user (shown below) you can see that Will’s ‘Edit’ rights have been set to ‘All’. This means that Will can edit any Account record that he has access to via Teams and so he can edit both National and International records.

These permissions currently do not match what Will’s manager is requesting!

In order to use team-based permissions, the function has to be enabled per module by an Administrator user following the below steps (if not already enabled).

The below steps should be performed by a Sugar Administrator. 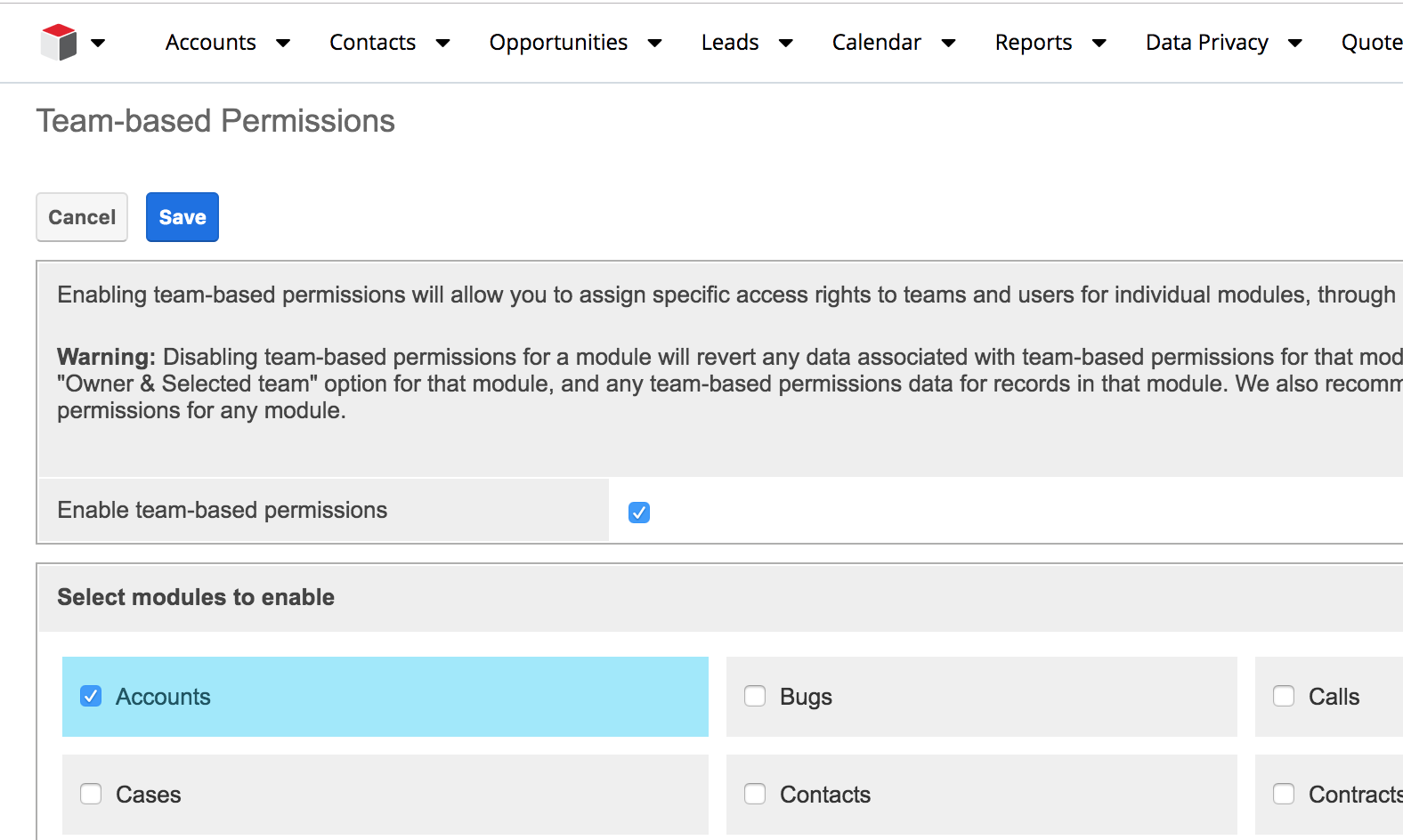 An Administrator user must then configure/amend Roles (Admin > Role Management) for the team-based permissions to take effect. Inside of a role, a new access option will be available on module level permissions, called ‘Owner & Selected Teams‘.

In the above example, Will’s role has been updated so that ‘Edit’ permissions for Accounts has been updated to ‘Owner & Selected Teams’. This means that the user can edit records for which they are the assigned user (= Owner) OR in which the user’s selected team is unlocked. For example, if in a user’s user profile the selected team is National and in the Account record the Team National is unlocked, then the user will be able to edit the record regardless of if they are the assigned user or not.

After a module has been enabled for team-based permissions, you will see in edit-mode of a record that the Teams field displays a lock button. By default, all teams of a record will be locked (closed lock symbol). Select the lock button to unlock a team (open lock symbol). Below example (see screenshot) shows an Account record where the team National is unlocked.

Now, what does it mean when a team is unlocked in a record?

The user Will Westin will be able to edit the Account record ‘XYZ Funding Inc’ as his selected team ‘National’ has been unlocked, even though he is not the assigned user of this record.

If Will was to create a new Account record, the team would default to his Primary and Selected team ‘National’. This means that the record is automatically unlocked for all users that have the team ‘National’ set as their selected team in their user profile.

If you have any further questions relating to Team-based permissions please contact us by clicking on the below button.

Is This You? Series: “It takes days for our sales people to get back to a lead…”

Is This You? Series: “I have spreadsheet fatigue and we are drowning in system admin!”